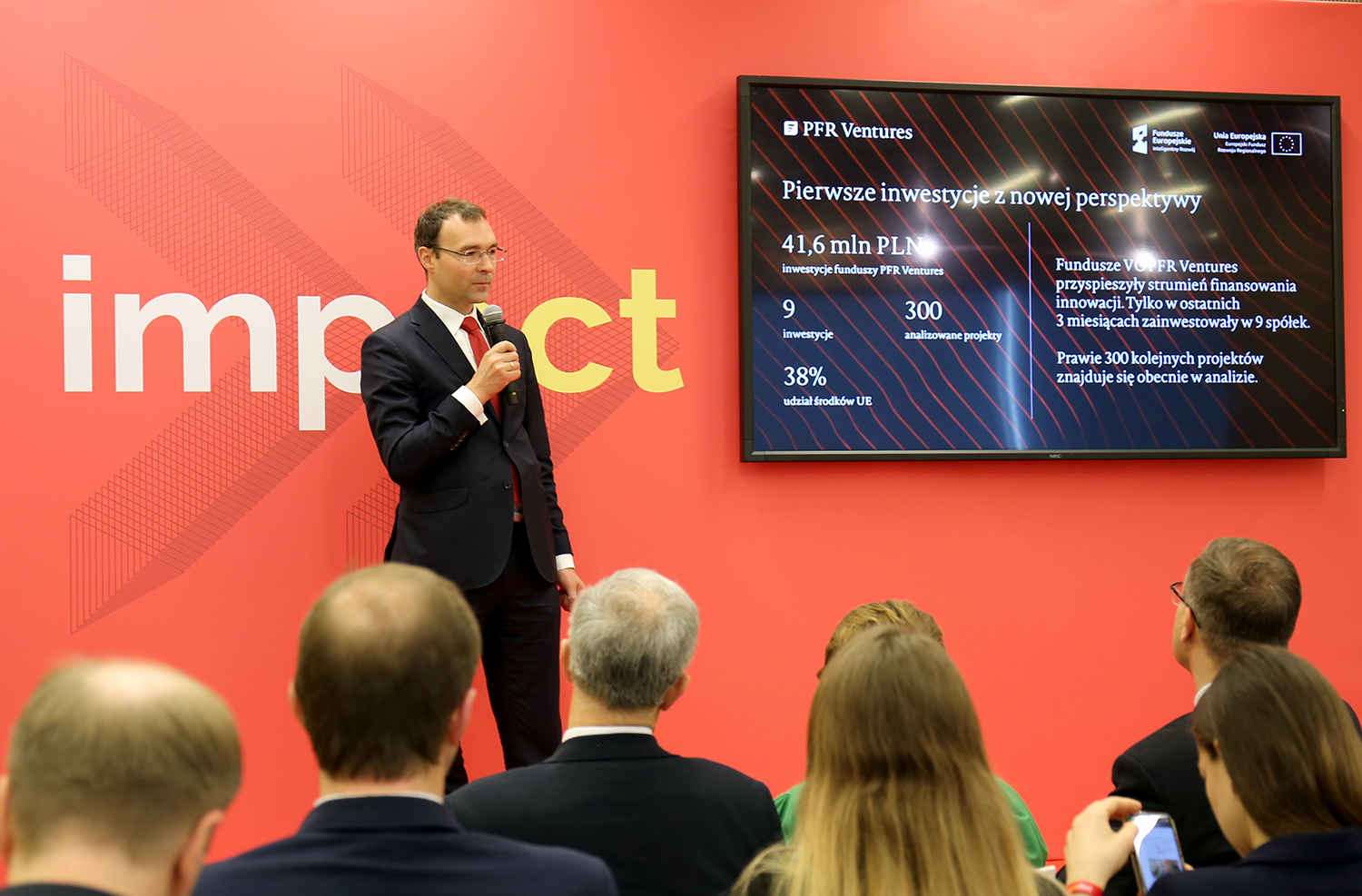 PFR Ventures has already launched 29 venture capital funds. The company informed, during the impact’19 conference, that 5 of them have already made their first investments for the combined about of PLN 41.6 million 9 innovative companies have received financing offered by publicly financed funds

PFR Ventures is a fund that manages the amount of nearly PLN 3 billion within the framework of the Smart Growth Operational Programme 2014-2020. Half of those means have already been transferred to 29 VC funds, where they were combined with private capital. In total, private investors will feed the additional PLN 1.8 billion to all PFR Ventrues funds.

Growth of the Polish venture capital market has been of utmost importance for us while creating the nationwide innovation ecosystem. One of our first decisions was to free the investment potential of VC funds by abolishing their double taxation scheme that was introduced in 2014. Venture funds are investment vehicles enabling start-ups to sail to the open seas. They play an indispensable role in the process of growing young, innovative companies. Not only do they provide the start-ups with funds required for investment purposes, but they also ensure access to international contacts, knowledge and experience of investors. All that makes me even more proud of the fact that one in three of the funds established by PFR operate on the international market. Thanks to such cooperation, the Polish ecosystem is growing at an even faster pace

Our venture capital sector is quite young, that’s why it keeps developing, to a large extent, thanks to the support offered by public funding. It’s a natural phase, and that’s why we have decided to support PFR Ventures with EU funding. A move that is already starting to bear the first fruit. As the sector matures, the share of private capital will be increasing, and the capital venture market itself will start generating growing added value for the economy. The share that EU funding has in the 9 investment projects announced today equals 38%

Investment made by teams that have been launched by PFR Ventures are another step in the activity of our fund’s fund. The private capital we have combined with public funding boosted the value of the VC market by additional PLN 2 billion in 2018. Now, the funding begins to flow to innovative businesses. Today we have proudly revealed the first nine investment projects, but their number will reach several hundred by 2023. We do hope that a Polish unicorn will be among them

The first startups received the money in Q1 2019. RST Ventures for Earth was the fastest of all funds. Its partners secured seed funding for ZEME - a company that focuses on managing industrial waste. Subsequent investments were pursued by KnowledgeHub which provided funds to bike specialists Activy and Sundose – a company manufacturing personalized dietary supplements.

Higher financing was ensured by funds operating under the Otwarte Innowacje (Open Innovations) program. Montis Capital invested in Talkin’ Things - a company that moves product packaging into the Internet of Things, and in Skriware – an entity offering a 3D printing technology-based educational solution. Aper Ventures, in turn, established cooperation with Talent Alpha – a company that creates a recruitment platform for the IT sector, gaining momentum thanks to the efforts of Przemysław Beendt.

The FinchCapital fund has also undertaken its first activities, having already invested in as many as three separate projects. The funding was directed, inter alia, to Twisto (deferred payments) - a company funded also by Velocity Capital, ING Ventures, Uniqa Ventures and ING Bank Bank Śląski. Earlier, the fund invested in PerfOps - an entity offering advanced Internet infrastructure analytics services. The fund has also supported Symmetrical - a company intending to revolutionize the system of taking out loans as we know it today.

I am glad that our funds have already commenced the investment process. The first PLN 40 million have been contributed both to seed companies, and to businesses that are already planning their international expansion. This proves that the division of EU funding into programs under which the funds have been established was a good move facilitating the flow of VC funds

Since mid-2016, the PFR Group has provided financing to 50 different companies. Its value exceeded PLN 250 million, and the largest portion of those funds originated from KFK funds. Their investment horizon ended at the end of 2018.