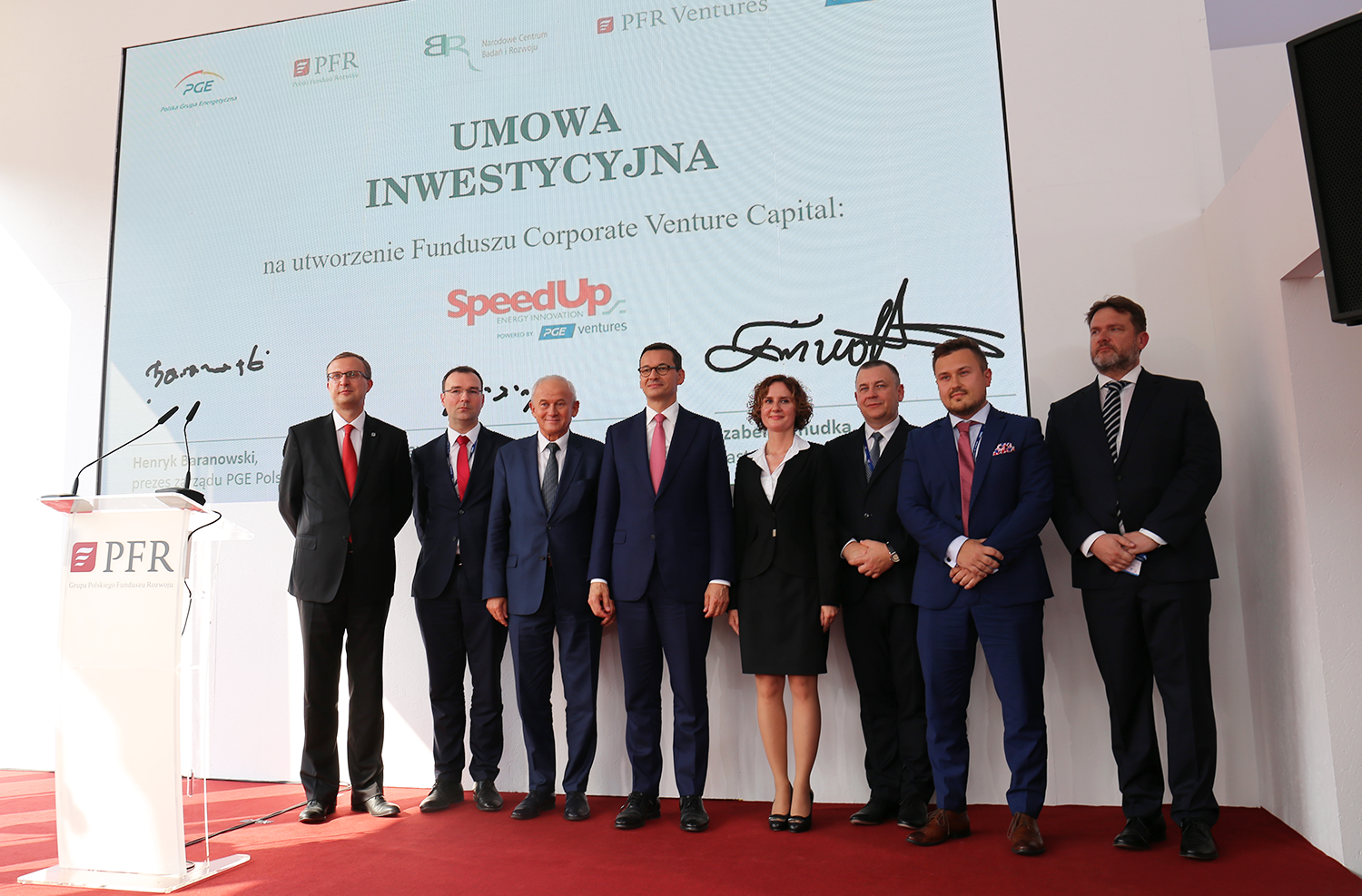 Within five years joint fund of PGE Polish Energy Group, the Polish Development Fund, and the National Centre for Research and Development will invest a total of PLN 100 in the most innovative start-ups. It targets projects related to Industry 4.0, digitalization, energy storage, e-mobility, digitalization of client contact, and big data.

PGE Ventures, a company belonging to the PGE Capital Group, PFR Ventures, a company belonging to the PFR Group, SpeedUp Group, and the National Centre for Research and Development jointly created SpeedUp Energy Innovation powered by PGE Ventures (SEI). The purpose of the newly established corporate venture capital (CVC) fund comprises start-up investments at an advanced development stage. Ultimately, the capitalisation of the new fund is to reach PLN 100 mn.

The establishment of SEI is yet another step in the development of a powerful base of innovations in the PGE Group. New business models implemented by the Group allow to extend the operations conducted by PGE with capital markets. The investment agreement concluded with PFR is a proof and at the same time a manifestation of successful development of PGE's position on the Venture Capital market in Poland.

The implementation of such undertakings on the part of PGE lies with PGE Ventures, which will act as an investor that will have an impact on the investment policy of the SEI fund. We're proud that jointly with the Polish Development Fund we're building an investment fund whose significance is so extensive for the Polish economy, and in particular with regard to an increase in the scale of innovations in the Polish energy industry. The monies that the SEI fund will have at its disposal will be used to develop the most innovative technological start-ups whose increase in value may bring tangible values for the entire Polish economy

says Henryk Baranowski, President of the Management Board of PGE Polish Energy Group.

The PFR strategic objectives consist in a significant increase in the availability of funding for young and innovative companies. This is supposed to translate into building a modern 4.0 economy which will make Poland a European innovation hub. This objective can be implemented, among others, thanks to PFR Ventures plans to invest in start-ups around PLN 4.5 bn jointly with independent investors through independent funds. The only such independent entity is none other than SEI

says Paweł Borys, President of the Management Board of the Polish Development Fund.

The fund will be managed by a professional team whose task will involve investing means on market terms, regardless of the sources of capital. The objective of the fund will be to maximize the goodwill of companies in which it invest as well as to maximize the value of the entire asset portfolio for investors

says Maciej Ćwikiewicz, President of the Management Board of PFR Ventures.

A joint fund by PGE Ventures, PFR Ventures, and the National Centre for Research is the first institutional Fund of Funds CVC (FoF) in the world – PFR NCBR CVC FIZ. Half of its monies comes from European funds (Operational Programme Smart Growth 2014-2020). SpeedUp Energy Innovation powered by PGE Ventures will be co-financed 1:1 by the Fund of Funds and PGE Ventures. The SEI fund targets investments in technological start-ups associated with a vast chain of values of the PGE Group or featuring high innovativeness and growth potential.

The new fund is a big step towards the development of the Polish system for supporting R&D projects. It's also the best confirmation that with last year's decision on the establishment of the Fund of Funds (FoF) NCBR responded to the specific needs of innovators regarding subsequent stages of funding research projects. SEI will be a perfect supplement to the portfolio of instruments funding R&D projects that are offered to start-ups by NCBR and the PFR Group

says Prof Maciej Chorowski, Head of the National Centre for Research and Development.

A natural stage of developing SpeedUp Venture Capital Group will be to become involved in funds which give us an opportunity to invest at more advanced stages of companies' growth. The Polish market offers many initiatives supporting early stages of companies' growth, but there is still not enough capital supporting projects at growth and commercialisation from seed stage, i.e. right before implementation and launch. SpeedUp Energy Innovation will be a perfect supplement to this offer and also an opportunity for entrepreneurs that have completed the initial stage of development of their companies

Thanks to the investment activities of the SEI fund, the PGE Group will be present at each stage of development of young companies while holding access to innovative technologies developed by mature start-ups. Moreover, investment areas of the SEI fund coincide with our business activities.

This means that it will be possible to see how selected projects, which will be included in the SEI's investment portfolio, will perform in their natural environment, i.e. using the PGE's infrastructure comprising mines, power plants, heat and power stations, distribution assets, and client service systems, and so they will be potentially used in the current operations of the Group while contribution to the optimization of business processes and the development of new technologies

Ultimately, the SEI's capitalisation will reach PLN 100 mn. These means will be allocated both to investments and the operating activities of the fund. In the course of a 5-year investment period the SEI fund plans to execute around 12 capital movements and several follow-on investments. Scheduled investment threshold for the first funding round of funding will range from PLN 3 mn to 3.5 mn, it is also possible to additionally capitalise selected projects from the first funding round to as much as PLN 10 mn. The SEI fund also allows for co-investments, especially in the course of scheduled follow-on investments.

The new fund will be particularly interested in companies having a high potential to generate cash flows and featuring a high technological potential. As for its investment criteria, the SEI fund anticipates that potential investment projects must be at the stage of at least early growth. Moreover, such projects must generate income on operations, and their capital demand should be primarily allocated to market expansion.

One of the assumptions of investment activities is that the SEI fund prefers industries and sectors which fall within the interest of the PGE Capital Group.

Capitalisation of the Fund of Funds PFR NCBR CVC amounts to approximately EUR 200 mn, which corresponds to around PLN 865 mn. The maximum capitalisation of equity funds may reach even PLN 320 mn, with the monies per one investment amounting to PLN 60 mn.

The Polish Development Fund (PFR) is a capital group which offers instruments for the development of companies, local-governments, and private individuals, investing in sustainable social and economic development. It operates on the basis of a professional team and best international standards. The mission of PFR, being a Polish development financial institution, is to implement programmes which boost Poland’s long-term investment and economic potential, as well as to make opportunities equal, and protect the natural environment. More information at: www.pfr.pl.

The National Centre for Research and Development (NCBR) is an executive agency of the Minister of Science and Higher Education. It has combined the world of science and business for more than 10 years while making sure that the conditions for research and development works are appropriate. By co-funding R&D processes, the Centre supports native entrepreneurs by significantly reducing their business risk which pertains to the implementation of landmark research projects. The NCBR's mission is to implement tasks aimed at the social and economic growth of Poland and to solve specific civilisation problems encountered by its residents. The NCBR is an Intermediate Body in programmes such as Smart Growth and Knowledge Education Development. It also implements a number of national and international programmes and carries out state security and defence projects.

With an annual R&D budget of EUR 1 bn, the NCBR is currently the largest centre for supporting development, science, and economy both in Poland and in the region. More information at: www.ncbr.gov.pl

SpeedUp Venture Capital Group is a leading group of venture capital funds investing at early stages of companies' growth (seed, pre-revenue, and early growth). The funds belonging to the group are interested in companies and enterprises from Central and Eastern Europe that want to win a global market using their own technological solutions in areas such as fintech/insurtech, martech/adtech, medtech, IoT, and hardware.